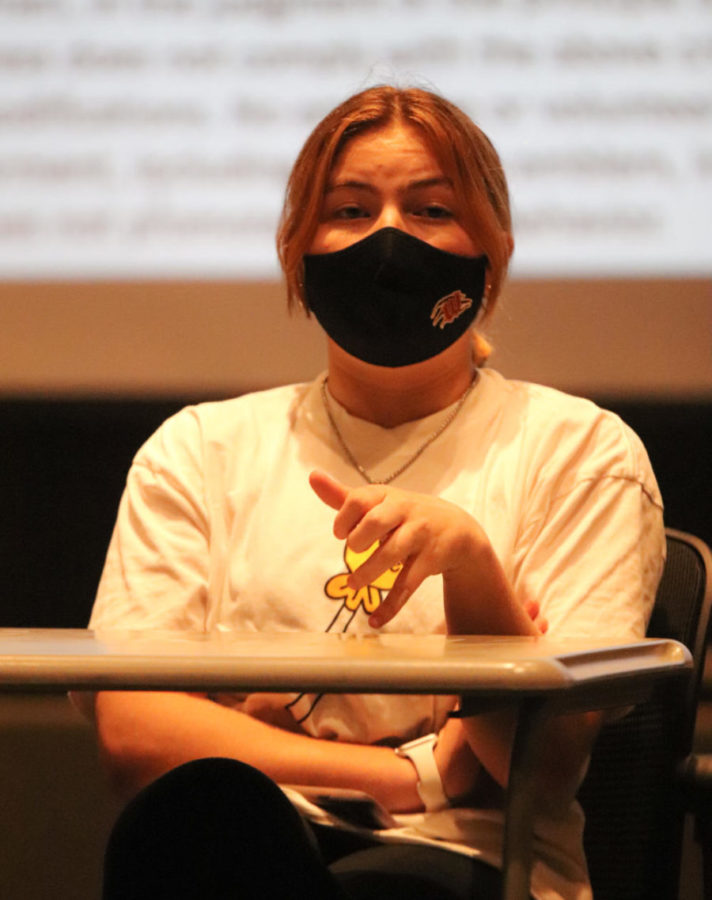 On Sept. 7, Students protested the new dress code by wearing tank tops and other clothes considered to be inappropriate. Supporters of the cause had drawn stars and hearts on their hands, and some even talked to Principal Dr. Edward Tate about the changes being made to the dress code. The students and staff agreed to have a town hall meeting to discuss the issues.

“The board of education expects student dress and grooming to be clean and appropriate,” Tate said, “Not girls, not boys; All students.”

On Sept. 7, the administration and students assembled in the little theater to discuss the updated dress code. Many students had concerns about inequality between genders and the reinforcement of the dress code from teachers. Tate took the stage along with three student representatives, seniors Gianna Rizzo and Nikaylee Rees, and junior Mary White.

“I have seen a football player wear one of those tops that have the sides open and he didn’t get dress coded at all,” junior Lan-Linh Tran said, “Why is that?”

In past years, administration has been more lenient about enforcing the dress code, and the students worried that the new modifications would force them to alter their wardrobes. Students hung posters and notes across the school as an act of protest. If anyone had any questions, they could contact one of the administrators for help.

“I like wearing nice clothes, but it does not define me,” Tate said, “As long as you’re within the guidelines of the district’s rule, to my understanding, me and my team have not [objectified anyone].”

According to administration, the dress code doesn’t permit any clothes that may show undergarments, promotes something age-inappropriate, and anything too tight or too loose. Clothing must cover your underarms, which rules out wearing most tank tops. Additionally, tops worn must cover your midriff.

“Ladies, you can wear tank tops. The torso should be covered and if you decide you want to wear a tank top, nobody is going to call you on that. What you can’t have is undergarments being shown,” Assistant Principal Dr. Shannon Calohan said, “Spaghetti straps can be worn as long as the undergarments are not being shown. If you have on a spaghetti strap shirt, and a normal bra, you may get called out on it. We’re not saying that you can’t wear them at all, we’re saying you can’t show more than your straps.”

On the occasion of a dress code violation, a staff member will privately speak with the student to inform them about their breach of code. The student is then asked if they have a way to fix it or cover it, and if not, an administrator will help them find something to resolve the breach. Once the issue is resolved, the student goes back to class as long as the dress code is upheld.

“[I have] not made one change to Winnetonka High School as principal. Winnetonka does not need to be fixed. I’m not here to tear down the history that Winnetonka has but we can build on it,” Tate said, “We want to improve on learning and test scores but nothing needs to be fixed. This dress code policy hasn’t really changed, either. It has been revised, so it can be more understood, but this policy has not changed. The dress code is the dress code.”