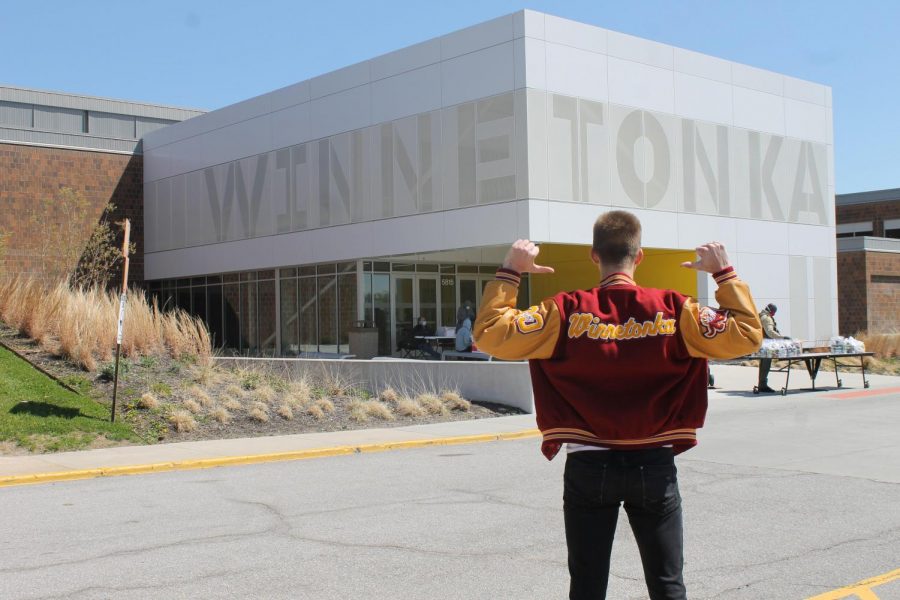 Aksels proudly stands in front of Winnetonka after the building is closed due to a stay-at-home order. In the background, staff members work hard to prepare food packages for the families they serve. This is his "final photo."

While many students across the country are holding their breath following statewide orders for schools to remain closed, foreign exchange students are experiencing a different type of crisis.

Due to concerns about the decreasing safety of international travel and the possibility of countries closing borders in the near future, exchange students are being sent back to their home country much earlier than expected, leaving many devastated as they say a sudden goodbye to the lives they built in their communities.

“They [exchange students] don’t have [the] whole experience of their year here and have to leave their host country in a very short time, which feels impossible,” Chiara said. “You have to leave your life, which you built in 8 months, in about 2 days. It is sad because I can’t even say goodbye to anybody and [I also have to] leave my host family early… I don’t know when I can see them again.”

For Latvia exchange student Aksels Jaunzemis, he learned of his new departure date, April 15, less than a week in advance. His original departure date was June 4.

Aksels attended Winnetonka through the FLEX (Future Leaders Exchange) program, funded by the U.S. Department of State. However, he was placed in Missouri with his host family through Greenheart Exchange, which places non-sponsored exchange students as well.

Like many other exchange programs, Greenheart Exchange decided to send many of their students home early.

“It started in the 2nd and 3rd week of March, whenever Coronavirus spiked in the U.S.,” Aksels said. “Greenheart Exchange sent all their non-scholarship exchange students home due to COVID-19; they can’t send FLEX students home because the U.S. Department of State is the one who decides that… I doubt that any exchange student will leave on their original departure date.”

Reflective of many exchange programs, Greenheart Exchange published an outline of their decision. In their post, they stated, “Ultimately, the decision came down to one factor: Greenheart is charged, first and foremost, with the health, safety, and welfare of all of our participants, and this is not something we feel we can guarantee for our participants in the foreseeable future, due to the rapid spread and increased severity of the virus in the U.S.”

This was a decision that was made not just based on the situation as it stood in communities around the country, but on the projections and concerns about what things will look like in the weeks and months ahead. We based our decision on the fact that the U.S. is just beginning to grapple with this pandemic outbreak, and that our situation here in the U.S. could look very different, very quickly.”

Still, this decision and its sudden enforcement is emotionally detrimental to exchange students, Aksels explained.

“There’s no way to describe how devastating that [being sent home early] is,” he said. “My exchange friends are going home early and they can’t hold themselves emotionally, and neither can I, because I feel so helpless.”

Chiara said she was excited for prom and to graduate with Winnetonka’s class of 2020, as her parents were planning a surprise visit for her graduation. Similarly, Aksels was excited to play on the Boys Volleyball team, but he was only able to attend two practices before NKCSD had to close their buildings.

“Life of an exchange student is not easy in the first place,” he said. “All this ‘you are going home’ [or] ‘you’re not going home” [or] “you are going home, but we don’t know when,” etc., is driving all of us crazy. I’m living with the thought ‘What if this is my last day here? What if I never see those people ever again? I wish I’d have done something more.’”

All of us are here for only one year, we all have one chance to go to prom, one chance to do spring sports, one chance to graduate, and now all of that is being taken away. In other words – it is hard, really, really hard being an exchange student right now.”

Below, Aksels provided several photos from his time in the U.S.