A submission by Oliver K. Bumer. 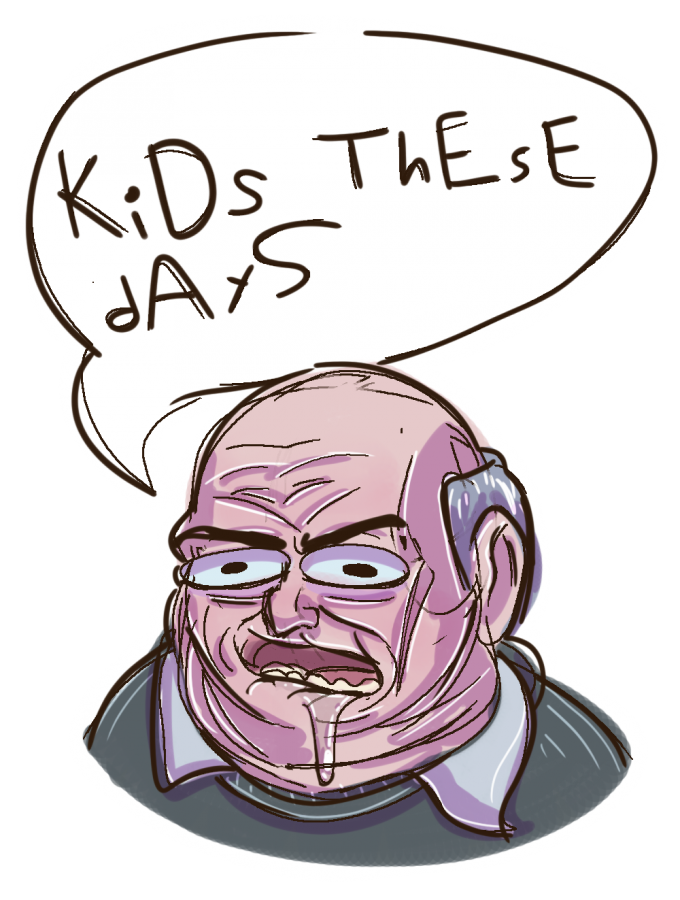 I am what is known as a “Baby Boomer”, or “Boomer” as you young snowflakes call them (probably because your attention spans can’t process more than two syllables now.) I was “boomed” into existence on August 6, 1945… and born nine months later. Heh. If you read your history books, you’d know that was right at the very end of World War II, where the great America gained its superiority over the world. Holy smokes, I love my country.

Let’s get to the point. There’s a certain phrase that has been getting passed around by the modern hooligans of today: a flippant, insulting, and destructive abomination of the English language. Every time I hear its utterance, I have to immediately reach for my heartburn medication and pray I don’t have a sudden heart attack. I’m sure you know what it is: “Ok, Boomer”.

This disrespectful phrase has been passed around all over the internet and, *shudders* has even been said in real life. It’s simply demeaning and contradictory to the advice our parents would always tell us as children: to respect your elders. Honestly, I almost feel as though I’ve been cheated in life. After being told to respect my elders for so many years, I grew up, excited to be showered with the respect I deserve from the youth. Instead, I was only greeted with “My opinion on women’s health doesn’t matter,” or “I don’t understand what minorities go through.” How dare you! I have a wife and a daughter! I went to a desegregated school for at least three years!

You “Millenials” and “Gen Z” members are so lucky these days. Back when I was your age, the world was so much harder. We had to deal with racism! Do you know how difficult it was for me to choose which side I was on during the Civil Rights Movement? Not to mention the Vietnam War, the most difficult and terrifying moments of my entire life, in which I fled to Canada for seven agonizingly-dull days before realizing I had never received a draft notice. And yet, like the true American I am, I pressed on during those trying times and managed to get a wife, three kids, and a fully-furnished house (a REAL house, not an “apartment”) by age 30. Man, where did the years go? I don’t see all you snowflakes achieving that by 30.

One thing you all don’t realize is that phrases like “OK Boomer” are going to essentially ruin our world’s culture and traditions as we know it. I’ve begun to notice that people don’t say “please” and “thank you” anymore. If you ask me, not saying “thank you” after an elder gives a youngster a piece of advice at the workplace should be a crime. I’ve been working the same job at McDonald’s for the last 40 years, and whenever I try to share some valuable knowledge to the naive whippersnappers around me, they just roll their eyes and say, “OK Boomer.” All I’m trying to tell them is that they are going to fail in life because of their dang piercings and neon-colored hair. The culture this phrase has brought about has turned the world upside down. The world seems to have gone crazy, with its Coronaviruses and “TikToks” and JoJo’s Bizarre Whatevers. I’m certain that if people would have listened to what us “Boomers” had to say, everything would have been as simple as things were when I was a child- when I could buy a sody-pop for a nickel.

Regardless, the years seem to have flown away from me. The people whose age I could’ve sworn I was at yesterday, I want them to become a mature and successful American like me, but I also want them to be rather unlike me, in a way. I spent my teens and twenties, the prime years of my life, in the safest, unambitious, and frankly-lazy way possible. I was comfortable, but I had nothing pushing me forward in life except for “The American Dream.” The world developed in front of me, and because I wasn’t paying attention, I ended up waking up one day, almost 75 years old and I hadn’t left a single mark on society. As a kid, I thought I’d be…somebody. I thought I’d be a part of history. Instead…I’m just…a boomer. So, youngins, if you ever needed to listen to a boomer, it’s now: Don’t let these days pass you by. Make your mark on this world. If you do that, or at least try, maybe someday down the line, you’ll end up becoming an okay boomer.