An appetite for strength

Wrestlers seek to satisfy constant physical demand through their diet 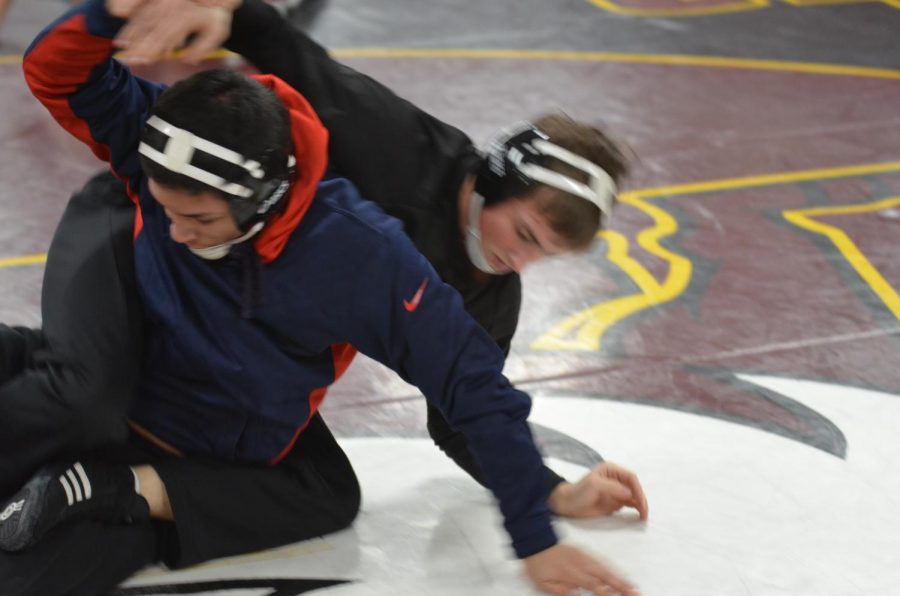 Junior John Murray wrestles with his opponent at practice on Jan. 29. Murray won three of five matches at conference on Feb. 10.

An estimated 45 million Americans make an attempt to eat healthier each year for various reasons according to the Boston Medical Center, but Winnetonka wrestlers diet to keep up with the high physical standards their sport requires of them.

Whether they started before or at the beginning of the season, wrestlers have implemented a special diet to boost energy and performance, increase stamina and stay in shape.

Although the American Heart Association recommends that children consume less than six teaspoons of sugar per day, the average child takes in about 32 teaspoons. As the amount of sugar ingested increases, so does the feeling of tiredness. Wrestlers avoid eating sugary foods due to the infamous sugar crashes associated with it.

“It’s about sustained energy over a length of time,” Lowry said. “If you’re at a wrestling competition all day – 10 to 12 hours – you have to have plenty of good fuel. Otherwise, your first match might look good, but by the time you are on your fourth or fifth, you’re done.”

Lowry tells his wrestlers to cut down to the basics. Sophomore Eric Frazier, who is on the varsity team, has been following this advice since the beginning of the season.

“[We eat] fruits, vegetables, good meats, pretty much anything that isn’t prepackaged or precooked,” Frazier said. “These foods help keep your energy and stamina up. They ensure that you will have enough strength to actually take the other guy down.”

Wrestlers should strive for seven percent body fat according to Lowry, which can be achieved through satisfying the body’s need for both nutritious and complex foods. To lose fat, an individual must eat fewer calories than burned.

“Raw vegetables, that’s your best friend. You can eat raw vegetables all day and not gain much weight at all,” Lowry said. “It’s a lot of good filler. People typically think to completely cut carbs out, but carbs are a lot of good energy. We want complex carbs, not simple carbs, so whole grains as opposed to white bread. Brown rice instead of white rice, things like that.”

In addition to vegetables and carbohydrates, proteins are also a building block needed to increase muscle while maintaining strength and energy. Good proteins, such as lean meats, help build and repair the body’s tissues and are essential to building up strong bones, muscles and skin. The MyPyramid food patterns recommend that protein accounts for 17 to 21 percent of caloric intake for the average person, while wrestlers who are trying to lose weight are advised to only take in 12 to15 percent.

“You want to get a decent amount of protein in you, usually about a gram of protein for every pound of body weight,” Lowry said. “So if you weigh 150 pounds, that’s 150 grams of protein, which is quite a bit. If you’re trying to lose weight, we want that more like half: 150 pounds, 75 grams of protein. Sometimes you’ll have to supplement to get to that much protein, so taking a protein shake of some sorts, drinking plenty of milk.”

Protein can be found in a lot of foods, but not many are suitable for the wrestlers’ diet. Choosing the right foods can be a challenge, especially during lunch, where they have to eat what is given to them. However, Frazier has lost 25 pounds and dropped a weight class while sticking to his diet.

“Right now I’m trying to get my weight down to 182 [pounds] and I’ve been eating more peanut butter than I ever have before,” Frazier said. “I like to eat the peanut butter and jelly sandwich, but not too much of it, the bread is heavy on your stomach and it has a hard time digesting it.”

Instead of eating breakfast, lunch and dinner like the majority of Americans, Lowry recommends breaking the day down into between four and six smaller meals, advice followed by junior Patrick Biggs, who wrestled in the 285 pound weight class.

“I typically try to snack throughout the day,” Biggs said. “I snack through breakfast and by the time people are on lunch, I’m on my second or third snack. I try to stay with the diet, but every once in awhile I have cheat days.”

Fighting against temptations can be hard, but the wrestlers know that with every healthy meal, they are closer to a healthy body.