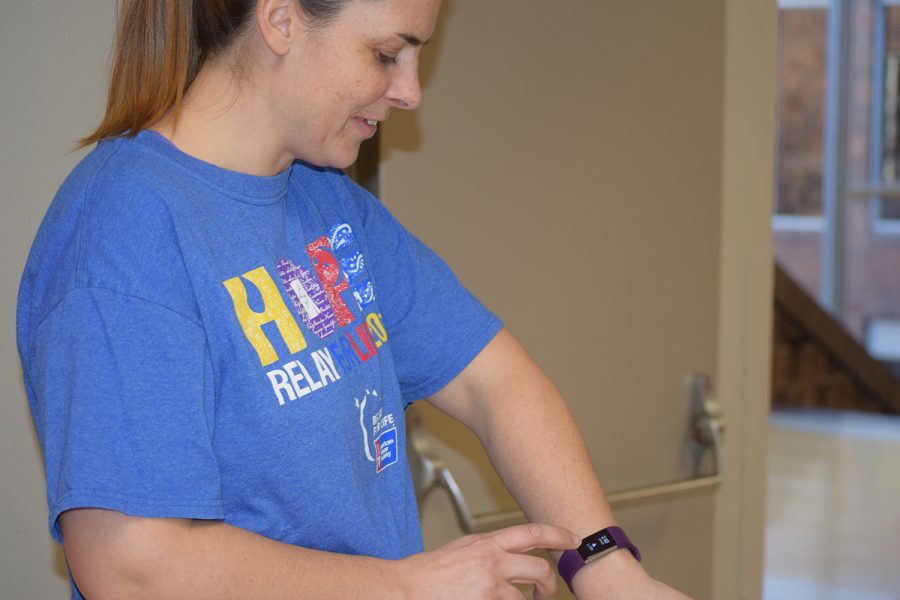 Friendly competition arises among the staff as teachers eagerly race toward a healthy lifestyle.

“It’s not to lose weight, it’s simply to get more activity in our lives,” history teacher Sarah Green said.

Fitbits have recently become a global trend and are beneficial in helping people become more healthy. According to statista.org, the Fitbit corporation has more than 16 million active users and has sold more than 38 million devices worldwide.

“I don’t know why it’s so popular,” french teacher Erica Stones said. “I know I like it because I like to be able to see the data and the numbers and the goal and seeing how I’m progressing towards the goal.”

The Fitbit is a device that helps keep people aware of being active. It connects to an app that allows teachers to track their steps to their goal while competing with other teachers.

“When you go onto your Fitbit, you can actually tag people and challenge them to be in your challenge,” Green said. “Last year we actually had two challenges because we had a group of people that had under 50,000 steps a week and then we had a couple of people that were doing 100 to 120 thousand steps per week. We just do two different groups, so that you were kind of in a group that met your level.”

The teachers are doing a challenge on the Fitbit called “Workweek Hustle” which allows teachers to communicate with each other and see where the others are on the challenge.

According to Green, the Fitbit competition is all about motivation and keeping each other accountable.

“The Fitbit will tell you, this person’s on your feet or this person’s right behind you,” Green said. “So sometimes it motivates you knowing that someone is in this with you.”

This challenge has been around for awhile but has recently picked up pace.

“Every week it starts over. We try to do it almost every week. It’s renewed interest because of the New Year,” math teacher Melanie Fender said.

Some teachers compete for the number of steps and to get ahead of others. For other teachers, it is all about helping each other out to meet their step goal.

“Some of us would jump out of bed at 11:50 at night to be first place,” Green said. “Then for some it’s just the idea of camaraderie. It’s the idea that you’re doing this with other people just to get walking more and get more fit.”

According to Green, Fitbits are a very helpful reminder to stay active and stick to a goal.

“I think as a society we’ve become more aware of how we need to [be more active] and some of us are addicted to our Fitbits,” Green said. “This is a constant reminder for me to be more active.”

By doing this challenge with other people in and out of the Tonka community, Fender is motivated to meet her step goal.

“I know it gets people moving and it’s always nice to have a friendly competition. That’s one thing that motivates me, the accountability thing,” Fender said. “[Doing this challenge, teachers] start feeling better, moving more and getting healthier.”