Behind every order of coffee from Griffin Grounds there is a story, a student. A student like freshman Caleb Smith, who is not that different from everybody else despite the fact that he is in a special education class.

“Being in a SPED class helps me a lot,” Smith said. “I struggle if I’m in a big crowd with other kids who are acting up because I get overwhelmed and then I start doing that.”

Smith has been working at Griffin Grounds since the coffee shop opened two months ago in the library.

“It’s really fun to work there. I get to have more conversations with people which is cool because I’m a really friendly person and I love talking to everybody but it’s something I just don’t really get the chance to do all the time,” Smith said.

Special education paraprofessional Larry Magariel has seen a change in his students’ behavior since they have started working at Griffin Grounds.

“It’s teaching kids how to interact with other kids who are in the mainstream,” Magariel said. “It’s helping them to communicate better, they feel more at ease.”

Sophomore Destiny Fossett, who has been working alongside Smith since the opening of Griffin Grounds, agrees that being able to meet new people is the best part of working there. 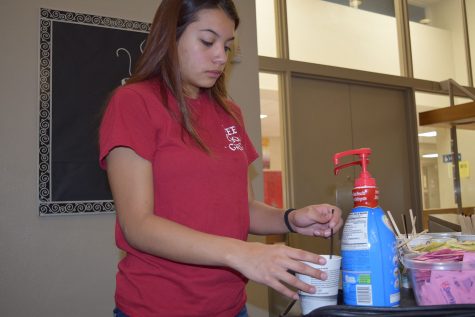 “We get to communicate with other students in the school and make friends with them which is really cool,” Fossett said. “We also make and deliver all the coffee orders.”

Griffin Grounds is more than just a coffee shop, it is also an integral part of the special education department’s funding and a deciding factor in the opportunities that are awarded to students within the department.

“We got to go on a field trip last week, rollerskating, because of money we got from the coffee shop,” Fossett said. “It was really fun. Getting to work at the coffee shop teaches us how to work and then it lets us do other things that we or the school or our teachers want us to do.”

“I love spending time with them [students in the special education program],” Adamson said. “It’s really nice to be able to step out of my stressful school life and just  go to them. When I see them they come up to me and give me hugs. Whenever I walk into the SPED room it’s like walking into another world. They’re the nicest, most loving people in the world.”

Adamson is not alone. According to Magariel more and more students have begun to take an interest in the special education department.

According to Adamson, students within the special education program do not get the recognition they deserve.

“I feel like Tonka has looked at these students and stereotyped them as dumb, but they’re not, they’re very intellectual,” Adamson said. “I feel like we think that they’re weird or don’t like us or can’t relate to us but it’s not like that at all. They’re nice, they’re loving, they’re really funny and they talk like crazy. They’re just like us except a thousand times nicer.”

Smith himself said that he has felt the effects of generalizations about students in special education classes.

“I wish people would be more comfortable around us, that they’d be nicer because we’re just like everyone else,” Smith said. “I mean we really do struggle to blend in with everyone, so it’s kind of hard on us when people make fun of that and think we don’t notice because we do notice, but we just can’t change even if we’re trying our best.”

But according to Smith, Griffin Grounds may be helping to change that false perception.

“Now that I work [at Griffin Grounds] people have been nicer. They say hi when they see me in the halls,” Smith said. “I think they’re starting to realize that I’m friendly, I like to talk, I’m just like them.”

Fossett has also felt the effect of Griffin Grounds since she started working there.

“I think students are treating us a little bit nicer since the coffee shop opened than they used to,” Fossett said. “They’re realizing that we’re the same as them.”

For Adamson, the impact of the coffee shop on Tonka’s student population is clearly visible.

“They used to be kind of like outcasts. They didn’t really have any friends outside of each other because no one paid them attention, but Griffin Grounds is changing people’s perception,” Adamson said. “This coffee shop has opened up doors for the SPED kids because it gives them the chance to communicate with other people throughout the school. They’re finally seen. They run the front desk and interact with all the students and staff and have daily conversations with them. Tonka is finally beginning to see that these kids are more than just ‘SPED students.’”

Adamson, Fossett, Magariel and Smith all have the same wish, for more students to start conversations with those in special education classes and for not only Tonka but also the rest of the world to see these students for who they really are.

“I think Griffin Grounds is helping Tonka students see them for the first time,” Adamson said. “I think it’s showing us that they are not their disability, that they’re just like you and me.”