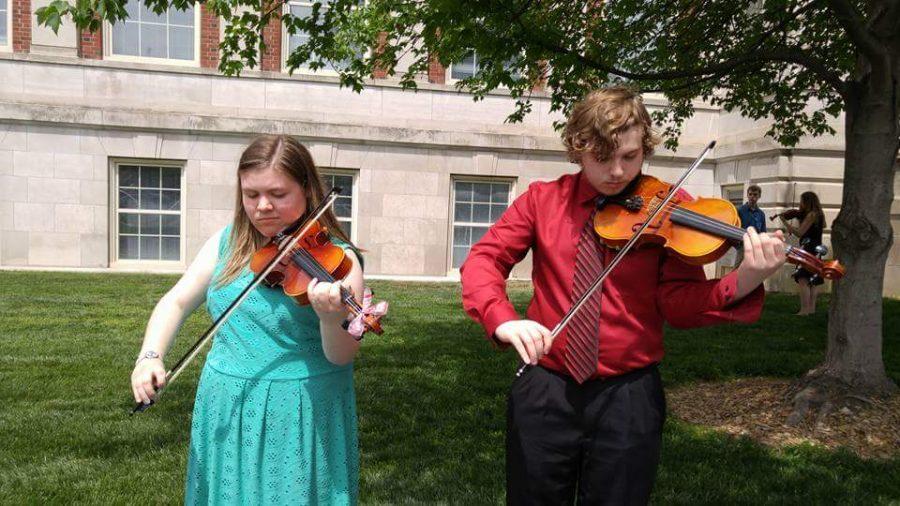 Senior Brooke Glaszczak and junior Riley Davison warming up for their violin duet at state contest on April 28.

This past Thursday, student musicians started trekking over to a thriving city for their spotlight moment in the Missouri State High School Activities Association (MSHSAA) State Music Festival.

“We went down to Columbia, MO and first stopped by a mall to go shopping, then spent the night at a hotel, and spent the whole day at Mizzou for the music festival,” senior Tierney Little said.

Some performers from band, choir and orchestra all earned the ratings needed to be eligible for state competition. There were high amounts of effort put into securing just the opportunity alone of state contest.

“What drove me the most to work towards it [state] this year was actually not the ratings; all I really cared about was being able to go to state,” junior Joshua Jenkins said. “The thought of having the privilege to go to state encouraged me more than anything to work really hard.”

On top of strenuous student life, those who were working towards state had to give up even more of their free time than normal.

“I spent countless hours at home with my mother, who would listen to me play over and over again, giving me advice. What drove me to work towards state was that I wanted to show that I was putting in the time, effort and commitment into my instrument, to better myself and to be someone to look up to,” sophomore Rana Ekilah said.

Some student instrumentalists have been working towards state for their whole high school career, and have had to focus on mental grit rather than all-around encouragement.

“It’s my senior year and I wanted to finally make state before it was too late,” Little said. “We made state with a seven miscellaneous woodwind ensemble that no one believed in, except ourselves.”

Now being state contest veterans, the young musicians are only looking forward to their future progression in the music field.

“It was a lot of fun getting to know everyone better; next year I hope I can do another solo, hopefully a duet, and get a one on each at state,” Jenkins said.